The Things That Leave Us Cold

Part 1 of 4  (Audio version available to listen to; link at the end of page)

I stood by the open window and watched and waited, surrounded on all sides by the wisteria that clung on as time passed by and forgave nothing. It felt like I was watching the seasons change as the leaves lost their gleam in the sunlight, found their darker shade as the early autumn encroached and finally fell to the ground and withered as winter wound its way onto the deserted street. Our quiet little street with the bench just beyond the gate where I’d watched you, from that same window, smoking outside so you wouldn’t aggravate my asthma, in the rain with a brolly, in the snow with your fur hat, one hand gloved and other taking heat from the cigarette you clasped between your fingers as tightly as I was wrapped around them. Our street which is now graced with a flow of cyclists, can you believe it? Paris, the new city of cyclists, which just gives Parisians, especially Parisian drivers, one more thing to complain about. We cycled together once, do you remember, not here of course, not back in those days. In Nice, I think it was, in a field covered in red poppies, you at the helm with your soft blond curls unravelling in the breeze and me on the back, with that silly beret you forced me to wear, legs akimbo and arms wrapped around your waist, carried away by the strength and charm of your laughter which was endless and the smell of lavender fabric softener from your t-shirt which I nestled my nose into as if there was nothing more pleasant in the world to inhale when, in fact, it was you I was inhaling, nothing more all encompassing than simply the scent of you with my head on your back and the world falling away behind us before we tumbled off the bike and tumbled over each other. You still had grass knotted in your hair when we got back to our hotel that night which, of course, left me embarrassed and you elated as the receptionist nonchalantly pointed it out. And so it was, with the memory of all that had once been so palpable, that I watched and waited, watched and waited, finding a certain hope in the sound of every approaching footstep and then disillusionment in the appearance of every human shadow I realised could not be yours.
And yet I’d known all along, from the very start, the foolishness of my folly, my frivolous foray into the past. But I’d convinced myself that it was fate that lead me back, not regret, not loneliness, not quite the truth I finally realised as the days became weeks before I folded up the months and packed them away with other, niggling, neurotic memorabilia in the closet, in the dark, in the past. It was brave though, at the beginning, going back up that staircase, those old timber steps which wound their way to that silly door with the stupid key I never got the hang of, not like you, in all your practicality, standing amused at all my clumsiness. It was audacious to open that door into what had become a marooned mausoleum in our absence. The years had only clustered cobwebs onto our acquisitions, trophies, treasures. I lifted dust laden sheets off the furniture as if undressing the room, as if I’d find you beneath them with that devilish smile of yours, laughing at my inability to find you like you did so often, all those years ago, when you’d hide in the shower, behind the armchair, beneath the bed, like a child at play at hide and seek. But you were nowhere to be found and yet you were everywhere at the same time. Your imprint was etched into your seat, your footstool, your side of the bed. It was brave, I’m not lying, simultaneously brave and hard and cruel to an ageing man seeking only a scent of what once was and finding only emptiness in three rooms, teasing me with everything we once believed to be all we would ever need in the world. 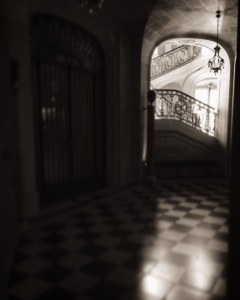 Then slowly life began to move on, as it does, necessities, chores, rendezvous, routines and somehow I found reasons to come away from the window without even realising, new paths that took me in opposite directions to the past which I had been seductively drawn to. At first I’d walked to Montsouris, that park, along the hill you’d always run up before me, because that was you, always ahead, always on front, always seeing where we were going before we actually got there or, at least, before I got there. You at the top cheering me on while I gasped for air and crawled and I did basically crawl up there, on hand and foot and in that tracksuit you’d bought for me because you knew I’d never have the guts to buy it myself. As usual you knew what suited me more than I did.

But distractions came their way and carried me from those painful apparitions, those streets we’d once claimed as our own, walking hand in hand in a time when nothing seemed to matter apart from the closeness we shared amid your humour and my desire, the intimacy we’d embraced in that back room with its red carpet while we entwined limbs, lust and love beneath the sheets of that bed we finally battered to death and the connection we created until we got so lost in each other that I managed to lose sight of who we once were individually.
Don’t get me wrong, it wasn’t that I forgot you entirely, not at all. I’d come back for you, come back to find you, no matter how ridiculous that may sound after so long apart. But somehow it dawned on me that there was a difference between waiting and wishing, and actually living. Losing you had been my greatest waste, perhaps our greatest waste if I can still speak for us both, but I couldn’t let myself waste away anymore while waiting for you too. I hope you can understand that. It was I who’d come back, be it more or less in the shadows, but I wasn’t sure if the light of day would be forgiving to all that had fallen in between us. And yet, even in the bare light of day, your shadow still hung over me, shading me, sheltering me.

And then he came along.

All words and photographs of Paris by Damien B. Donnelly

4 thoughts on “THE THINGS THAT LEAVE US COLD, PART 1”