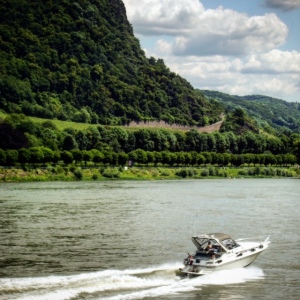 He was sitting by the edge of the river, proudly stroking the growth of his beard, as tourist boats sailed by when she passed his table and her scent caught him, a lingering fragrance of citrus and bergamot, flooding him with childhood memories of beaches filled with exotic tourists who’d frequented his usually quiet seaside town during the summer months, hijacking the harbour with their boats, the sands with their strange accents and all the while emblazoning his local haunts with an air of excitement and mystery.
Dressed in an almost transparent turquoise skirt that caressed her ankles and a cream, almost gold, fitted tee shirt, she smiled as if in reply to his stare and took a table next to his, even though the terrace was empty except for them.
“You are foreign, no? American?” she asked in a direct and clear voice.
“Yes,” Henry answered, adding a cough to clear his throat and break his stare.
“I think so, I see you here and that is what I think, you look much too relaxed to be German.”
“Well, can’t say I know much about that, only been here a day… you know, but you got the American tourist damn right, and in one go. Am I such a goddamn giveaway?”
“No,” she replied, both immediate and forceful, as if there were no point to ever question her answer and she swept blonde tresses back from her face that bellowed on a breeze that continued to cover him with teasing traces of her scent, “but you have an air of elsewhere, if you understand me correctly, you have a… a certain mystery to you,” she said, almost repeating what he had just thought himself with regard to the people who’d visited his home town, now way across the seas.
“I gotta tell you, your perfume’s sweet as,” he told her, sensing a directness to the situation that was both integral and to be encouraged.
“Oh,” she said, almost dismissively, “this stuff,” she continued as she brought her wrist up to her noise and took in her own aroma, “I guess it’s ‘sweet as’, like you say, to someone who does not live here. No one from here would ever remark on it, but thank you,” she said and he wasn’t sure if that had been an acknowledgement of his own ignorance or a disappointment at her own countrymen and their disregard for all that lay beneath their noses, literally.
“May I ask what you’re doing here, at such an hour, you know, for a Tuesday?”
“I may ask you too, no?” she responded, cunningly throwing his own question back at him.
“Well, for me, it’s just like you say, I’m the relaxed tourist, remember? So I got my excuse.”
She raised an eyebrow and smiled at his slowly reverberating response before turning towards the water to watch an open topped barge pass by, shipping coal down the ancient flowing valley of the River Rhine.
“It’s good to step out of oneself, now and again, do you not think? Test the other water.”
“I heartily agree,” he replied, reminding himself of the various waters he recently waded through and the ladies who’d only been too willing to share them with him since he’d arrived on this exotic continent, overflowing with tastes and odours that he’d previously only dreamt of.
“I go to the Chocolate Museum this morning, two children were at the cacao fountain and, behind their parents backs, they let the chocolate trickle onto their tongues,” she told him,” it’s that building just over there,” she continued, pointing just a short way down the river.
“No one from here goes in, you know, we don’t even eat that chocolate. But I saw them and wondered what it felt like, to be so excited, to taste what you shouldn’t, what you usually can only dream about and then… well, I suddenly found myself doing the very same thing. Can you believe it?” she asked him.
“No, but gimme a sec,” he said and he began to imagine her delicate tongue slipping its way out from her tender lips and moaning slightly as the warm liquid caressed her tongue.
“Okay, now I can,” he said as he shifted in his chair and spread his legs in her direction.
“I see you can,” she said, giving him a sultry smile before standing up and walking over to him.
“4711,” she told him, “Glockenglasse 4. See you at 5pm, today, then you can really get close to the scent that is so arousing to you. I see you there,” she said and suddenly she was off before he could reply.
Shocked at her straight forwardness, he quickly noted her address on his phone. Jesus, he’d been told the Germans were direct but this was something else. He’d been in the city less than 24 hours, was leaving the following day, but had already scored and scored big. 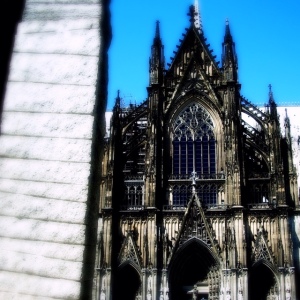 At 4.30pm, he was on the way to her apartment, No. 4711, in the Glockengasse, building number 4. He was wearing navy American Eagle jeans that gripped this thighs and a crisp white teeshirt, trying to suggest an air of low key, kinda-bothered-but-not-really.
That afternoon he’d wandered haphazardly around the ancient town, past the imposing darkness of the city’s impressive Cathedral, a short flit around the modern art museum next door before taking some photos of the old City Hall as a smiling, newly married couple posed on the historic Renaissance steps of the hall’s magnificent Loggia which looked as if it had been kidnapped from some sleeping Italian city.
Later, after changing at his hotel, he turned off the Rudolphplatz and wandered through the gay dominated streets known as the Bermuda Triangle and realised that not only were gazes turning in the direction of his 21 year old ass, but if he didn’t hurry up, then he might not make it past some of the tougher looking leather clad drooling faces, all busy dreaming up ways to show an American in Germany how down right perverse they could truly be.
Once free of the wolf whistles and surprising amount of chaps without a horse in sight, he felt a certain stride slip its way into his walk. This Europe was doing its very best to make a man out of him. Mamma would be pleased, he thought. She’d had her own share of foreign adventures right on her own doorstep, throughout his childhood, with the Cuban cabana boy, the Mexican gardener and the Brazilian so-called masseuse, so perhaps it was rooted in his jeans after all.
He crossed a busy intersection and immediately came face to face with a startling Neo-Gothic building with the number 4711 splashed across its top floor. Instantly his heart began to sink. What the hell, he though to himself as the stride slipped from his legs and his steps became heavy and slow. Under the arches of the lower floor he could already make out countless windows stacked with enormous bottles of perfume with a turquoise and gold label.
As he stepped beneath one of the arches and, as the sun slipped away from his fair hair, he made out the name of the perfume, Eau du Cologne, and suddenly a German sense of twisted humour flooded his 21 year old innocence and foreigner gullibility. He’d been duped, he thought to himself. He’d met what looked like the perfect girl by the water in Cologne who’d turned out to be nothing more than a walking advert for the water of Cologne itself.
“You’re one damn fool, Henry,” he said to himself as he opened the door to the ancient perfume store and followed up on the truth of her offer by really getting close to her scent, even if it was only in a cold, but well packaged, bottle. 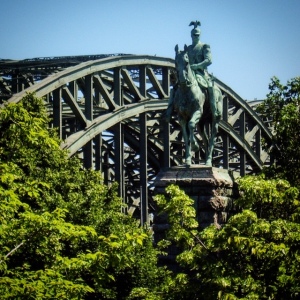