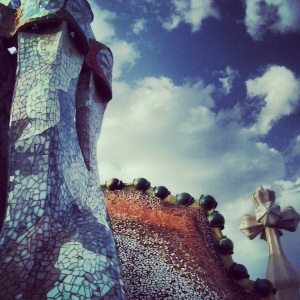 Gravel voiced Sophie and her hard of hearing husband, Marty, were sitting on a sun drenched terrace near a bustling intersection, burnt, blistered and blocked up but embracing a very real possibility of relief. They’d just met another American couple, also doing a European tour, though travelling in opposite directions, and they were overjoyed at finally finding like-minded people after all the weirdos they’d come across so far. It was also a well deserved distraction from their own company. Marriage could be a blessing, but 40 days together, without a break, was beginning to put more of a strain on their relationship than their previous 65 years of togetherness. Mary Margaret; big earrings, big boobs and bigger smile, and her grown up daughter, JoBeth; no earrings, no boobs but winning smile, had been at the same cafe, a table away and, as accents carried, a conversation began between the 4 foreigners and, 2 hours later, they were huddled together under the heat of the Passeig de Gracia putting this strange European world to right. Sophie was already calculating the possibility of cancelling Jane in Berlin and following her new BFF’s while Marty basked in the much appreciated attention of his new female admirers who knew nothing about his bunions or his wife’s poop problem.

“Oh golly, I tell you, Parc Guell is just wonderful, truly, like Disney without the Mickey’s. What can I say, I’m a Gaudi fan, love the man, even have one of his t-shirts. So much colour, I was in heaven while Mother just loved the mosaics, didn’t you, tell them, you did,” JoBeth was saying, “and then the beaches, oh my! Although I’d stay away from Mar Bella and Sitges. It’s sorta boys only, if you know what I mean,” she told them and gave Marty a cheeky wink along with her winning smile.

Marty and Sophie didn’t know what she meant but nodded away in blissful ignorance.

“And you gotta take the cable car up to Mont Tibidabo. I swear, I didn’t think that old contraption was gonna make it, truly. Thought we’d plummet back down when we were only half way up, but once you’re up, golly, the view is just wonderful, I tell you, wonderful. Am I right Mother, or am I right?”

“Oh well, she’s right, but she always is, it’s just darling,” Mary Margaret replied as she fumbled with her phone, “we should take you both up there.”

“And the food,” JoBeth interrupted in another bout of excitement that seemed irrepressible, “have you ever seen so many small plates just begging to be tasted? Tapas back home’s nothing like this. Authentic, didn’t I say that, Mother? It’s truly authentic. Watch out for anything red, mind you, blows your head off. Mother here downed a whole pitcher of water last night after the peppers,” she told them in between gulps of sangria, “then spent the night pressing her ass into the fridge. Not really, but you get my drift,” she said as her mother giggled and Sophie and Marty smiled at them even though they’d been petrified to try anything that wasn’t sauce free and grilled to cremation.

“Red is hot in every language, in every culture, on every plate,” the daughter told them.

“Unfortunately, Marty here ain’t really one for anything too hot,” Sophie told her BFF’s, as if signalling a slight disappointment at her own husband which, this time, didn’t slip past him.

“No, but you could sure do with something to let more than just the steam out,” he whispered to her “if you know what I mean.”

“And you gotta see the Flamenco, it’s wonderful. How they don’t break their heels with all that banging I just don’t know, and the noise, but it adds to the atmosphere. Just don’t go expecting a quiet romantic dinner,” she told the couple and Sophie wondered if this younger woman had any idea what romance was when you’d been stuck to the same man, bunions and blockages, for more than half a century.

“Our JoBeth was taken up, actually, two nights ago. This moustached man got her into a right sweat. She brought the house down, our little girl,” her mother said, smiling at her daughter and touching her cheek as if she were still 13 with pig tails and double track braces. 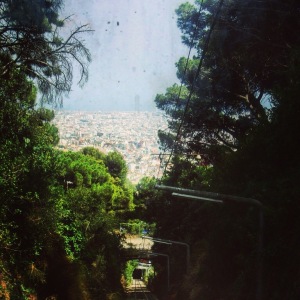 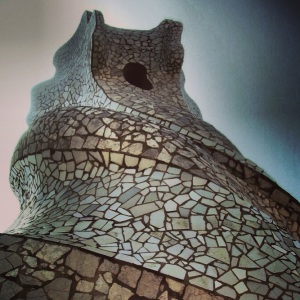 “Oy Marty, things are finally looking up,” Sophie said, almost unable to contain her excitement when JoBeth went to the restroom and her mother left them to find a better reception for her cell phone, “these are the kinda gals who could put fun into foreign, into being away from home, for so long, away from good company. I feel homely just hearing their adorable accents,” she told her husband as she waved a salamander painted fan over her glowing cleavage.

“Thought we got away to see something new, Soph?” Marty replied, not wanting to appear too over eager at the adoration he’d been getting from these new glorious gals.

“Oy vey, you wanna make friends with these European freaks, Marty? I’ve barely understood a word anyone’s said in the last 3 cities. And now, at last, two smiling shiksas, happy to share their adventure with us. They’re probably lonely too, starved for a little male company, I’d say,” she said as she jokingly elbowed him, “seems such a pity it can’t last a little longer.”

“Well, they are good ones, I’ll give you that, Soph. And they seem to like us, even listened to your description of every cathedral we’ve seen so far. I can’t believe you hold in so much,” he remarked, with pun intended.

“So, how is everything?” JoBeth asked her mother when they both returned to the table.

“No change, praise the Lord,” she replied as she checked the buoyancy of her body-waved hair, “he’s in bed and she’s still held up in the suite with her empanadas for company.”

“And the closet?” the daughter asked.

“She won’t check,” came the response that intrigued Sophie and Marty and he gave his wife a look to see if she knew what it was all about but she seemed equally lost.

“Is everything okay?” Sophie asked, hoping her new friends felt close enough to confide in them.

“Daddy’s taking to peeing in the hotel closets. It’s our 3rd hotel in Barcelona,” JoBeth told them bluntly while her mother covered a giggle with a napkin.

“Daddy’s taken to what?” Marty asked, feeling more confused, “it’s not just the you of two?”

“Oh Lord no, sometimes I wish it was, Daddy’s here with us,” Mary Margaret explained, “and our Chilean nurse who’s decided to get homesick. Locked herself up in the hotel in the last 5 cities. Refuses to come out anymore till we go home.”

“And your Daddy?” Sophie asked Mary Margaret, confused as to whether it was her husband or if she just called her husband Daddy.

“Oh God, last time we took him out we lost him for 3 hours, at Park Guell. Security found him before we did,” she said, now unable to cover her laughter, “he’d taken off all this clothes and was sitting in the fountain. They didn’t see the humour so we were asked to leave.”

Neither did Marty or Sophie whose connection to their BFF’s was suddenly slipping away.

“He took a body wash across the road, in the Casa Batllo,” JoBeth added like it was nothing unusual, “there was an old washstand in one of the rooms, we got carried away with a painting and when we turned back, well, he’d just dropped his pants so we can’t go back there again either. It was truly a sight to see. A Chinese couple took a photo of him, they promised to email it to us.”

“Does this happen often?” Sophie enquired, deflating in her seat as her hopes ran down the drain.

“Oh golly, this is nothing, truly, wait till we tell you about Paris and the Louvre. He certainly put the smile on Mona Lisa. But it’s best if you meet him, maybe tomorrow?” Mary Margaret suggested.

Sophie shifted her position so she could kick her husband in the leg. It was time to go.

5 minutes later, they’d made their getaway and were happily strolling hand in hand until Sophie felt her bowels finally move and she smiled at Marty lovingly before she made the most startling noise.

“There she blows,” said her husband with a proud smile. 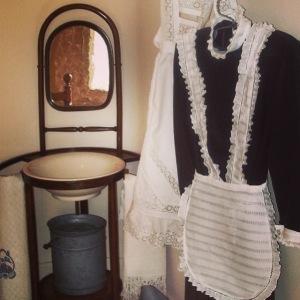 Kay McKenzie Cooke Website & Blog. See menu for more info. including bio: 'A Bit About Me.'